Do you like Marmite? I don’t, although I’m trying to get used to it slowly, somehow it feels like it is something I should enjoy. My point is, this cake is like Marmite, as in you either love it or you hate it. So far, a handful of my friends say they enjoy it, while the rest could happily survive without trying it ever again in their lives. But don’t let this put you off; you should give everything a go. Especially something so traditional and local and simple yet special as this.

As far as I’m aware, this cake is made only on a small island in Greece, on which I grew up. It is made by grannies on villages in large batches and then given away as presents to family and friends. At least that’s what happens in my family. It really is a matter of pride, to be able to make one of those well! People grew up on this stuff, because it involves such cheap and common ingredients and lasts well for a few weeks. Everyone knows what one should taste like, and they are very critical of any alterations of the recipe (even substituting honey for sugar is frowned upon!).

My mum attempted making it once. I was about 10 years old. I remember a lot of running around in the kitchen, some panicking and a lot of vigorous mixing. The end result was nice I think, but it didn’t compare to my granny’s version and I think my mum decided she would never manage to make one as good as the original one. Having been so critical of other people’s efforts, she decided to not put herself in that position again.

So what chance did I stand?! Although it could well be a failure, I was safe in the knowledge that my parents would not have to taste it and any criticism would come only from people that didn’t really know what a good one tastes like. And myself.

But I’ve just realised I haven’t even told you what I’m making yet! This Greek “cake” is called Ladopita. And that translates to “Oil Pie”. Olive oil of course. I wonder how many people have just closed this tab. Oh well. There you go:

Ingredients (This is a quarter of the standard recipe and makes about 20 pieces. It’s enough, trust me.)

I know that using glasses isn’t really the best way to measure things, and I have already expressed my disliking of the cups method, but this is a traditional Greek recipe. I wouldn’t dare spoiling it by making you use scales! It’s easy to estimate what half a kilo of flour is from a 1.5 kilo packet. Just use a standard water glass, about 250 ml. You can decide how much flour you need by judging the consistency of the mixture.

I am including quite a few rubbish pictures to help guide you through the process. First, heat up the oil in a big pot. Add the flour slowly and mix until smooth and creamy. It will look a bit like this:

Now you need to keep stirring over a medium heat to make sure you cook the flour without burning it. It might take a bit. Don’t get impatient, this is very important. In the meantime, pop the sugar and water in a pot and let it boil for 5-10 mins until it becomes a bit syrupy.

Your mixture is starting to look darker. First a bit like chestnut paste, and then it should take a brown-ish colour. 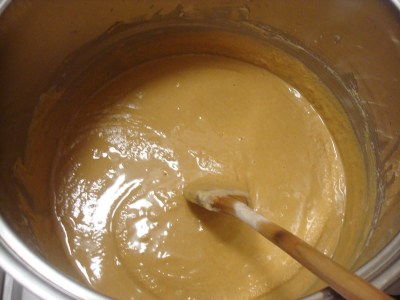 This is where I stopped. I think it needed a bit longer. If you keep stirring it won’t stick to the bottom, so you can wait until it gets a bit darker.
Now, add the syrup in batches. You should probably take the big pot off the heat. The first batch of syrup you add is going to make the mixture go mental. You’ve been warned hence you’re already more well prepared to do this than I was. This is how it looks after you start adding syrup. I think there is a drastic change because the hot syrup cooks the flour really quickly. It is very important that you keep stirring so it is all smooth, although this step won’t take more than 5 minutes. 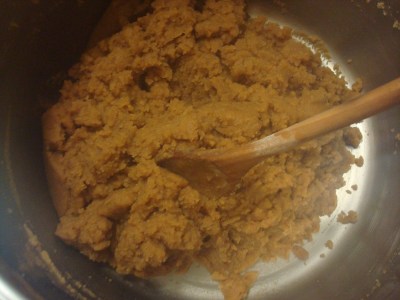 You can now add a bit of cinnamon to the dough. Take a baking tray, sprinkle a few sesame seeds on the bottom and spoon in the dough.

It looks all messy on the top so you need to take some baking paper, pop it on the top and then press down on the dough with your hands so it all becomes smooth and flat, like this:

Then, you sprinkle cinnamon, sesame seeds and a bit of sugar (preferably granulated) and, using a knife, cut it in diamond-shaped pieces, all the way to the bottom. This is very important as it will be quite hard to cut it in pretty pieces after it’s cooked.

Pop it in the preheated (200 degrees) oven for about an hour. You can check with a knife if it is cooked in the middle. It should be looking golden brown on the top. 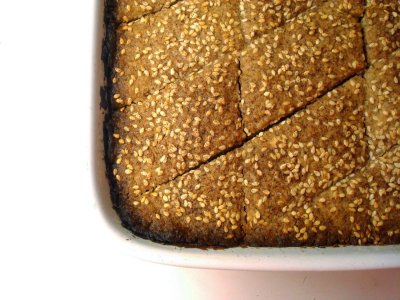 You can enjoy it as an afternoon snack with a cup of coffee, especially if dinner is still a long time away and you’re feeling a bit hungry. It’s quite filling! It should be crumbly on the inside without being dry. It keeps for at least a couple of weeks out of the fridge. Just cover it with some cling film so it doesn’t dry out.

I think overall mine was a good effort! It wasn’t as hard to cook as I thought it would be, it was just a bit intense for a few minutes when I added the syrup. Certainly not time consuming! It was of course no match for the original version and I probably wouldn’t dare serve it to my granny, but I think I could convince my parents to have a taste without feeling embarrassed.
If you decide to give it a go –  and you should! –  I’d love to hear how it went.

Previously on Round the World in 100 Recipes:
Spetsofai
Stuffed Onions
Lihnarakia
Beef with Aubergines

Next time on Round the World in 100 Recipes: Cheeeeeesy!