This is one of my favourite sandwiches ever and so great for a weekend lunchtime treat. I’ve been trying to recreate my favourite version for a while and I think I’ve finally got the balance right – turns out you can have too much bechamel sauce. Would would have thought it.

Anyway, since I’m running out of words (unless you want to hear about fracturing toughnesses and patterned grounds) I’ll go straight to the recipe. 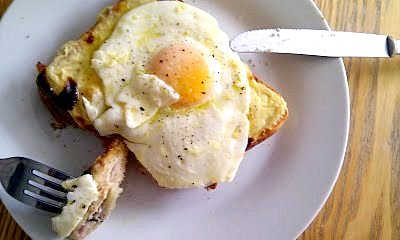 3 tbsp flour
3 tbsp olive oil (you can use butter, but I’m Greek)
less than a pint of milk (excuse the vagueness but I never measure – you should be able to tell from the consistency of the sauce)
1/2 to 1 tsp of english mustard (to taste)
pinch of nutmeg
salt and black pepper

Quickly fry the flour in the fat over medium heat until you’ve got a paste – do not overcook or your sauce will taste biscuity. Take off the heat and add a splash of milk and incorporate until you’ve got a smooth mixture. Turn the heat on again on low-medium and keep adding milk and mixing until the mixture is thick. You want it to be slightly thicker than normal bechamel so make sure you don’t add too much milk. Stir in the mustard, salt and pepper, and let it cool slightly.

Start preparing the toasties: spread about half a tablespoon of bechamel on one side, top with grated cheese and a slice of ham, and toast them using a panini press or a griddle pan. If you’re doing it on the hob, make sure it’s on medium heat as you don’t want the bread to toast before the cheese is melted.

Turn the grill on to preheat. When the toasties are golden on both sides, top with a tablespoon of bechamel each, and then more grated cheese. Place under the grill for a few minutes until the sauce is bubbling and the cheese is starting to brown. In the meantime, fry 4 eggs – I did them all in one large frying pan, so it didn’t take long.

To serve, just top each sandwich with a fried egg.