Shabu Shabu is one of the many recent incarnations of the mirror image of Teri Aki, situated by the river just off Magdalene bridge in Cambridge. Teri Aki is one of my favourite restaurants in Cambridge – it helps that I lived about 200 metres from it for 3 years so I’m rather emotionally attached to it. Their stir-fried udon have cured many a hangover, and their dumpling soup is perfect for a cold wintery day. There’s not much they do wrong, and that’s why the restaurant is always packed. Shabu Shabu though (or Aki Teri as it used to be called) is a complete mystery to me. Having been an almost identical copy of Teri Aki initially, with a slight Korean twist, it moved on to being a cocktail bar, then started serving hot pots and dim sum and is now mostly Thai. We thought we’d be adventurous and give it a try.

We were hangover and starving so we ordered a few starters to share and a main each. The starters were slightly hit-and-miss. The pork skewers with some satay-style sauce were juicy and with a good bit of char on the outside. The sauce was great too. Deep fried chicken wings were also nice; good crispy skin, reasonably tasty sauce.

The squid rings though were mediocre at best, looking like what you’d expect to find in the freezer section of a supermarket. And then there were these deep fried strips of beef which were dry and strangely tasteless – though the latter could have been the effect of the rather spicy sauce that accompanied them. 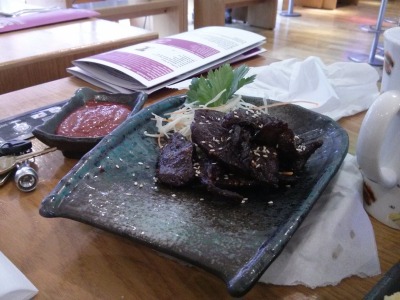 My pad thai was OK – the noodles had a nice bit of bite on them and the prawns were large and mostly juicy. But the sauce was too sweet and it soon became a bit sickly. No lime to cut through the richness either.

A beef massaman was probably the best of the mains, rich and warming. I only had a small taste but I suspect that if I had to eat the whole thing I might have struggled with the richness. The third main was a completely uninspiring chicken and vegetable stir fry. I reckon they could do with some stir frying lessons from their older and more experienced sibling next door. 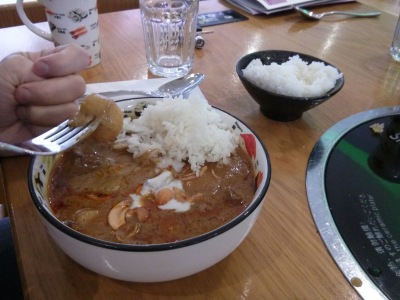 All in all, meh. I’ll wait for the inevitable next version of the restaurant before I return.