Breakfast is by far my favourite meal of the day. It’s the meal that can really kick-start an otherwise slow, bleary-eyed, lethargic morning. And so, without further ado, this post describes one of my favourite breakfasts of all-time. It would make for a perfect start to the day if, say, you’d just spent 11 hours being shaken to fuck on a sleeper train from Berlin to Basel.
Deutsche Bahn Continental Breakfast
Breakfast (enough to stave off hunger for about as long as it takes to eat)
1 anhydrous bread roll
1 plastic-wrapped croissant (original, French)
1 20g packet of white viscous matter
1 similarly-sized packet of off-white viscous matter
1 fractionally larger packet of orange gel
1 200 ml carton of “The Flintstone’s” orange juice
Beverage and beverage paraphernalia
1 heavily insulated cup of tepid, brown, ostensibly caffeinated liquid (hereinafter referred to as the “tepid brown”)
2 small capsules of white, fatty fluid
1 sachet of sugar
So, first, brace yourself for a massive, soul-crushing bout of disappointment. This step is critical. Spend too little time bracing yourself and you’ll end up so comprehensively dismayed that you climb under said sleeper train while it’s moving at speed.
Get someone to throw all the ingredients into a cardboard box covered in multilingual bullshit about “savouring the journey”. Get said person to hand the box to you. If they can keep a straight face, ask them to present it as if the box contained an actual breakfast.

Shut up.
Open the box. Jesus Christ. I hope you spent enough time on the bracing step. 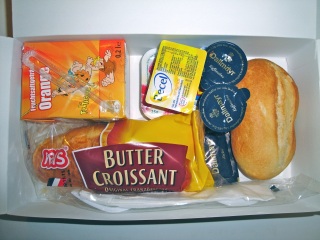 Jubilance.
Try and cut the bread roll to put a combination of the viscous matters inside it. You can’t. You actually can’t cut it. The flimsy plastic instrument with which you have been furnished has been deftly defeated by a bread roll. Seriously, on the Mohs scale of hardness, this bastard takes the crown. Step aside, diamond, Deutsche Bahn crust has stolen the limelight now.

Futile.
Unsheathe the croissant. Try and cut it in half with your mangled remains of a knife. (Moderate success awaits here.) Apply the orange gel to the inside of the croissant. Eat it. Try to savour the sparse hints of moisture therein.
In anger, throw the bread roll in the bin, along with the now-useless viscous matters.
Remove the straw from the front of The Flintstone’s orange juice carton. Use the sharpened end of the straw to pierce the tiny circle of foil on the dorsal face of the box. Squirt a bit of orange juice out of the box onto your jeans. Fuck.
Use the straw to suck the remaining orange juice out of the carton into your stomach, at which point it will start to drag down the pH of your entire digestive system. Bile is no match for this mother.
Add the fatty liquid and/or sugar to the tepid brown, to taste. Difficult. The tepid brown is just so astonishingly bland. Staggeringly insipid. Mindblowingly tasteless. Mind you, somewhat impressively, it does just about manage to taste of brown. The colour. I don’t have synesthesia, but if I did, I imagine this particular taste/colour confusion would make a lot of sense.
Now go home, have a long sit down and think about how it’s all come to this.