Just in case you’re all completely sick of turkey by now, but hopefully not all food, I thought I’d post what I cooked for an early Christmas lunch with some friends last Sunday. I find turkey really boring and we never bothered with it in my family – we just tend to make whatever we fancy or can find at the local butchers. I think this would go down well as a New Year’s Eve dinner too.

I didn’t bother we starters as we had two big roasts for the main, but Alex made some bacon-wrapped dates – so simple but really good, and kept guests happy while we were panicking over pork crackling. To make them, cut the bacon rashers in half lengthwise and wrap each date with half a rasher. Pop under a medium grill till crispy. 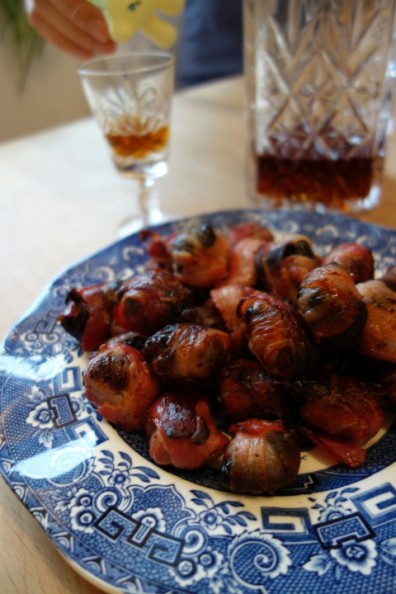 The two mains were the ever-dependable pork belly with anchovies and chestnuts (recipe here) and a slow-cooked lamb shoulder with a few garlic cloves stuffed in it. Both cooked for 4 hours, and the pork crackling was finished off under the grill. I added potato chunks to both trays about an hour before the meats were done, and let them cook in the meat juices. Served it all with honey-roast carrots and parsnips and boiled cavolo nero. 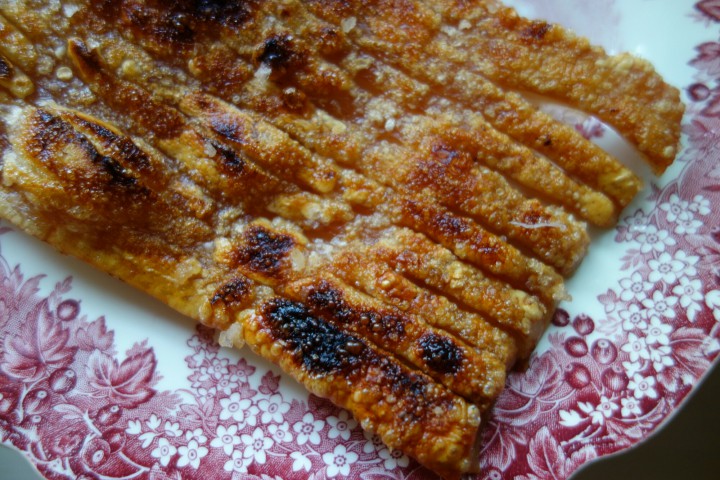 It had been ages since I made one of my favourite desserts, an apple tarte tatin, so I gave it a go again. I’m a bit out of practice so it wasn’t as photogenic as last time, but still tasted just as good. The apples take a good few hours to caramelise in the oven, so I cooked them the night before and finished them off with the pastry added on top after the meats were done. It takes a while, but involves minimal effort (apart from praying that the apples drop when you flip it upside down). 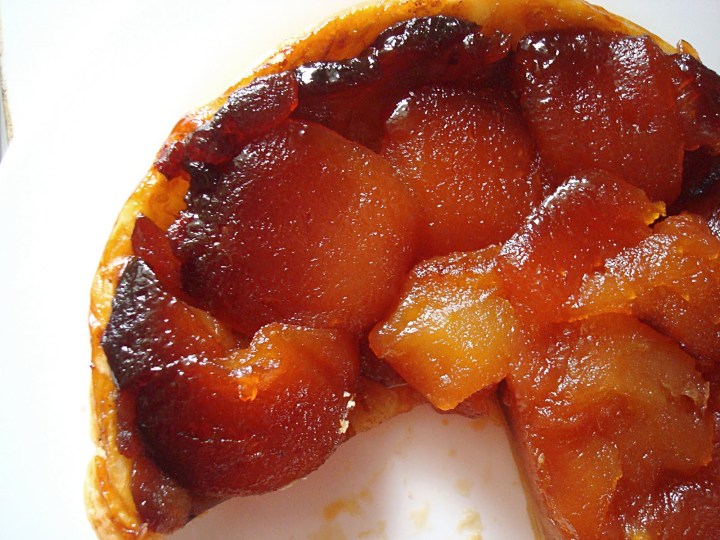 We finished it all off with a selection of cheeses and chocolates, and a good round of the Formula 1 game which is optional but highly recommended. Merry Christmas! 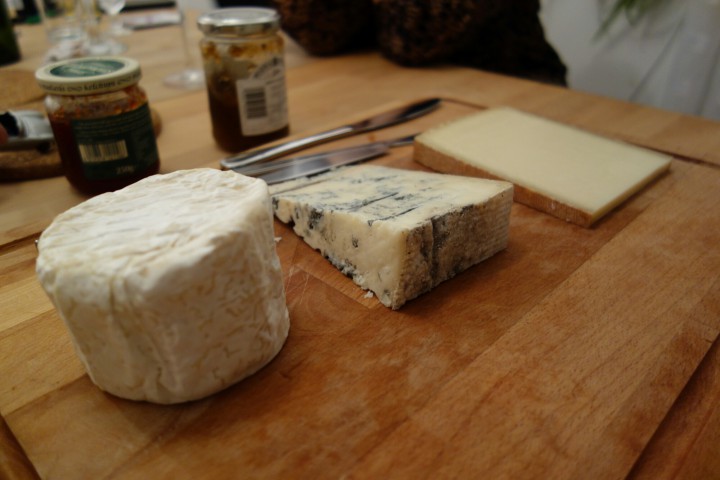 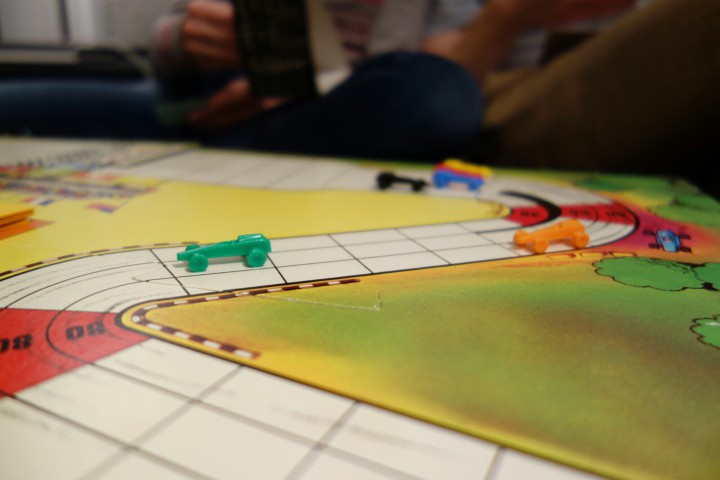 I always thought of courgette fritters as something you order at a greek tavern and because they taste so amazing I assumed they would be too difficult to make at home. I do have an irrational fear of deep-frying too so that might have contributed to my reluctance. It turns out they are pretty easy, and you can shallow fry them instead. We even made a “diet” version by dry frying them on a non-stick pan. They turned out less like fritters and more like savoury pancakes, but still tasted great. I added a red pointy pepper for sweetness and some chili for a bit of a kick. 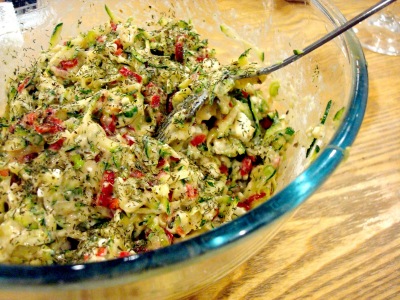 Ingredients (serves 3 as a main)

Mix all the ingredients together, adding the flour slowly and mixing until you get a gloopy but not too thick consistency. In the meantime, heat some sunflower/olive oil in a frying pan; you want plenty to cover the bottom of the pan and be about 1/2 cm high. With the pan over medium-high heat, use a tablespoon to carefully drop some mixture in the pan and slightly flatten the top. Cook on one side until golden brown and then flip it to cook the other side. If they seem to be cooking too quickly you can turn the heat down a bit, as you don’t want them to still be raw on the inside. A few minutes on each side should do. Remove and place on kitchen roll to absorb the extra oil. 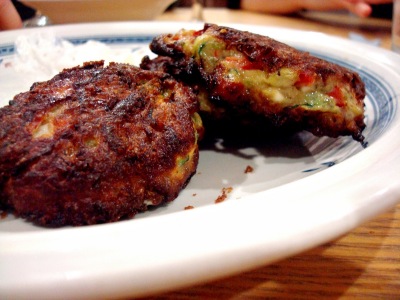 Serve these with tzatziki (garlicky yoghurt with cucumber) for dipping. They are also perfect as part of a greek meze dinner, as I did recently, serving them with spetsofai, a slab of feta and lots of crusty bread.

I have no idea if this is actually Indian but if it isn’t, it probably should be. It worked brilliantly as side to that Lamb and Spinach Curry together with some naan and rice and, according to Lizzie, it’s also great at barbecues. It’s not hard to imagine the sharpness and sweetness of this salad matching some smoky grilled lamb perfectly.

Ingredients (serves 4-6 as a side)

Slice the onions as thinly as possible and set aside. Cut the pomegranate in quarters and squeeze the juice into a bowl. Add the lime juice and the onions and let them marinate for 30 minutes. This will take away the onion harshness and save you from a unsociably stinky breath. 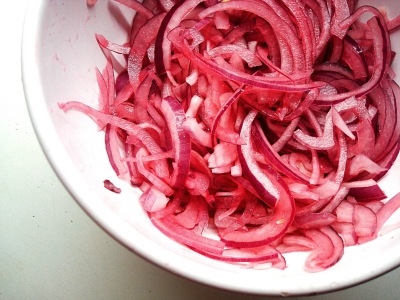 While onions are marinating, toast the cumin seeds and break them up in a pestle and mortar, or wrap them in a tea towel and bash them with a rolling pin. Pick the seeds out of the pomegranate, drain the onions and mix everything together. Add the chopped coriander leaves and season to taste. 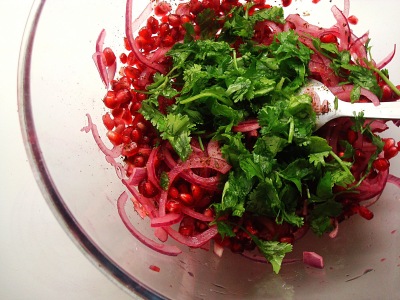 Serve alongside a curry or in some pita bread together with some grilled meat.

If this was a politics blog, I would have been busy all this time talking about all the big changes happening in the two countries I consider my home. It isn’t, and that’s why I’ve been silent. In real life, I mourned the loss of three lives, got angry at the violence of the police and worried about the future of a country that is “on the brink of the abyss”. In the meantime, the UK got a new government and I spent more than a few days complaining about not being able to vote. Not that it would have made much of difference anyway.

And after all that, I thought it was about time I put a recipe up here. If anyone still remembers, I do this thing where I pick a country and cook 10 different things from that country- provided I’ve never cooked them before. Last time I posted about this, I was doing India, and I promised some prawns. Well, guess what, I’ve gone back on my promise. But it’s ok, because this is better. Actually, it’s so good that I’ve already made it 3 or 4 times, and I thought it was about time I shared it with the world (well, actually, the BBC did that for me a while ago).

This is a very simple Indian dish, and apparently there exist other versions of it which use sour cream rather than yoghurt, but I thought I might as well keep it healthy. It’s a great side dish to any curry, or simply served with some Indian bread and/or rice. 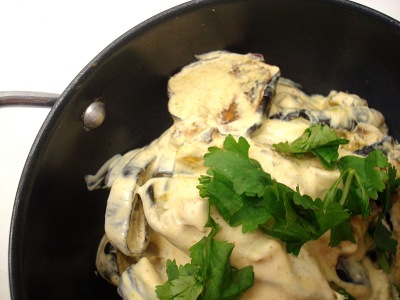 Aubergine in Yoghurt (adapted from here)

Ingredients (serves 4 as a side)

a handful of fresh coriander leaves, to garnish 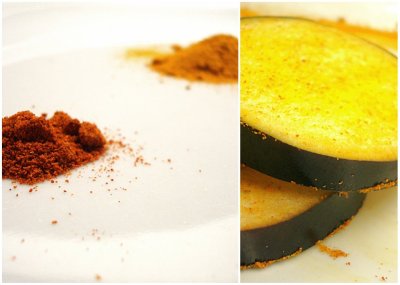 To prepare the aubergines, mix the oil with the turmeric, salt and 1/2 tsp of chilli powder in a bowl, brush each side of the aubergines and grill until soft, turning half way. 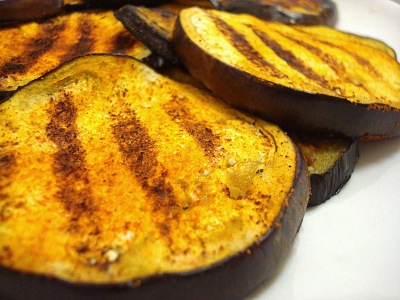 At this point, you can slice them in half to make it easier to mix with the yoghurt later.

In a bowl, beat 150ml of yoghurt with the sugar and the other 1/2 tsp of chilli powder. Roast the ground cumin in a non-stick pan over low heat until the smell starts filling the kitchen. Add the yoghurt and continue to heat gently until it’s warm. Add the aubergine slices and the remaining yoghurt and stir to combine. Serve with some chopped coriander leaves. 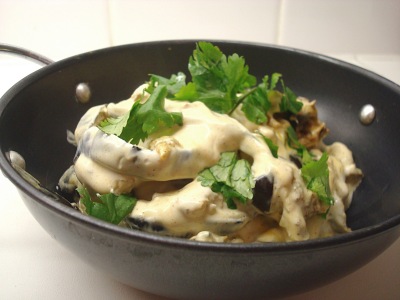 Have it as a side to a curry, with some naan bread and rice. It works well cold too, wrapped in pita bread for a quick leftover lunch. You can adjust the amount and type (I use hot) of chilli powder to make it as spicy as you like. I like it with a bit of a kick, as the cooling yoghurt makes sure you don’t burn yourself too much.