I’ve been having a massive craving for macaroni cheese for the last month. I blame the #meateasy.

On a hot Saturday, I woke up and knew what I wanted to eat. I’m not really big on light food when it’s hot. My cravings have nothing to do with the weather. So I made some macaroni cheese.

I had been thinking about a few versions, mainly Helen’s ultimate macaroni cheese and Ree’s fancy one. But then I had some bolognese leftover in the fridge and that combined with bechamel, cheese and pasta is basically pastitsio, one of my favourite Greek dishes. So I went for it.

The measurings in the recipe are vague. It could really be summarised in a few words: mix pasta, cheesy bechamel and bolognese sauce. Top with cheese. Bake. But here’s the (slightly) more detailed version anyway. 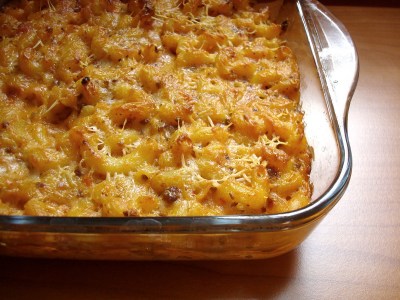 a mixture of cheeses (I used gouda, pecorino and a couple of spoons of mascarpone)
leftover bolognese sauce (I used about 1 1/2 cups, you can certainly go for more as it was on the light side)
extra pecorino for the top

For the sauce: quickly fry the flour with the fat, making sure you don’t burn it. Turn the heat right down. Warm the milk in the microwave and add it slowly to the flour-oil mixture, making sure it’s fully incorporated at every step. Season with salt and pepper, add nutmeg and the bay leaf and let it come to boil while stirring very frequently, to stop lumps from forming. If it becomes too thick, add some more milk, whisk, and let it reach boiling temperature again. You want it relatively runny so that the end result isn’t too thick and stodgy. Remove the bay leaf.

Boil the pasta for 2-3 minutes less than what the instructions say. Toss with a bit of olive oil and set aside.

Add the grated cheeses to the sauce and stir until melted. Add the pasta and mix well. Finally, stir the bolognese sauce in.

Spoon the mixture into oven dishes (I used a couple as I didn’t have  a big one available). Top with more grated pecorino and bake in the oven at 180 degrees for about 30-40 minutes, or until the top is nice and golden.

As it’s quite an intense meal, I served it with some spring greens. I boiled them for 2-3 minutes – don’t overcook them as they will lose their vibrant green colour and most of their goodness. Steaming would work too. I then quickly fried them with a drop of olive oil, a finely chopped garlic clove, salt and plenty of pepper and nutmeg. It made for a great side dish.

About a month ago, I went to a butcher and found some oxtail. I had never had it before but had seen this recipe and was keeping my eye out for it. I made a ragu and used my pasta machine for the first time to make the pasta for it. It was pretty amazing but since I then went to Greece for a few weeks, I forgot to blog about it. Now I’m back and it’s cold so I started craving the rich, thick, meaty sauce on eggy pasta. No doubt I’ll be making it again soon.

The recipe is fairly similar to a standard ragu recipe with an extra step to remove the meat from the bone. I’ve changed the original recipe slightly to use spices I am obsessed about had in hand.

In a large saucepan, brown off the meat. Take it out of the pan, add some olive oil and the onions and fry until soft. Add the garlic and fry for a further couple of minutes, making sure it doesn’t burn. Add the meat back in the pan together with the wine and let it boil so that the the alcohol evaporates. Add the tomatoes, some water, the Marmite and the herbs and spices and simmer for at least 2 hours (but the longer the better).

When the meat feels soft, take the pieces out and remove it from the bone. Add the meat piecesback into the pan, together with the aubergine and a little more water. Let it simmer for an hour. Serve with pasta.

Note to self: next time I’m ill, I should make soup. Not spend a couple of hours preparing something yummy and then not be able to taste it because my nose is blocked and my tastebuds have died.

I think it was nice. People that tasted it said it was nice. And you can’t really go wrong with beef and aubergines. And if there is one thing that can improve pasta, it’s cooking it in meat juice. Maybe I should start cooking all pasta in meat juice, or even better, roast it in butter and then simmer it in veal stock.

This dish falls under the kokkinisto category of Greek cooking, which translates as “made red” and is a general term for tomato stews. When meat is involved, I love using spices like cinnamon and nutmeg and the brilliant all-spice. It’s not a kokkinisto without them. My general rule is to go easy on them with beef, since it’s quite strong, but use them liberally with chicken. Chicken kokkinisto is definitely in my top 10 favourite dishes, in a similar way that the French (and not only!) love their coq au vin. It’s aromatic and saucy and rich, perfect winter food.

First, chop the onions and fry them in the olive oil. When they start getting soft, add the meat and let it brown. Add the wine, wait for a few minutes for the alcohol to evaporate and add the chopped and creamed tomatoes. Cook for as long as you like – the longer the better as it will make the meat tender. Add the spices and pepper, but not the salt. Someone told me that it makes the meat tough if you add it early on. I don’t know if it’s true, but it’s not a risk I’m willing to take. Especially with Sainsbury’s beef, you need all the help you can get.

Slice the aubergines, brush them with olive oil and grill them. Arrange on kitchen roll to get rid of any extra fat. Then slice them in quarters.

When your stew has stewed enough, add the aubergines, the salt, some boiled water and your pack of pasta. It is a bit tricky here: make sure you stir enough so the pasta doesn’t stick to the bottom but don’t add too much water or you will end up with a soup and don’t stir too much or your aubergines will disintegrate.

When the pasta is done, you’re done. Grate some cheese (preferably something salty and strong, like pecorino) and enjoy. It’s perfect for winter so if you try it, let me know how it went!

Previously on Round the World in 100 Recipes:
Spetsofai
Stuffed Onions
Lihnarakia

Next time on Round the World in 100 Recipes: This is scary.

You know how I said that the next dish would be summery and vegetarian? Well, this one is neither. Maybe a little bit summery but definitely not vegetarian. Not even suitable for those fake-veggies that eat fish but not meat. See, I was going to make something summery and vegetarian, but when I told Alex what I had in mind he said that I would be cheating if I made it. Apparently I promised to make things I’ve never made before. What was I thinking?!

Anyway, a promise is a promise. Get ready for some stinky food, since dinner tonight is Stuffed Onions. I am not sure which area exactly they come from, since they are so many different versions of them around the internet. Most of them say they come from the Dodecanese, so pick your favourite island. They recipe I chose is the one from Elias Mamalakis’s website. It’s in Greek, so I’ll re-write it here in English. I’ve made a couple of changes too.

To prepare the onions: Slice off the ends and peel them. You want to cut a larger bit from the top (the side where green things start growing out of if you leave them for too long). Boil them whole in salted water for about 20 mins, or until soft. Take them out, let them cool down so that you can handle them and pull out a couple of layers from each one. Put them on a tray and chop up the insides.

For the aubergines: You can either chop them up whole or, if you want to stuff them too, remove the flesh and set them on the side together with the onions.

For the filling: In a large pan, fry the chopped onions and aubergines with some olive oil. When they are soft, add the mince and fry until brown. Then add the rice and the wine and boil until the alcohol evaporates. Next, stir in the tomato puree and some water, let it boil once more and remove from the heat. Mix in the chopped parsley. 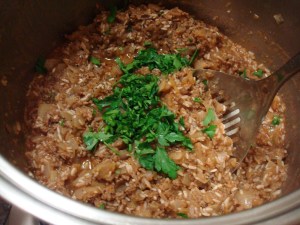 When the filling has cooled down a little bit, fill the onions (and the aubergines, if you have some) with a teaspoon. You will probably have too much filling, which is good. Put the rest around the onions, it will get really nice and sticky after it cooks. Cut the tomatoes in wedges and arrange them around the stuffed onions.

Drizzle with olive oil and some more water, cover with foil and let it cook in a preheated oven for at least an hour at 170 degrees. Uncover and let it brown for a further 15 mins. 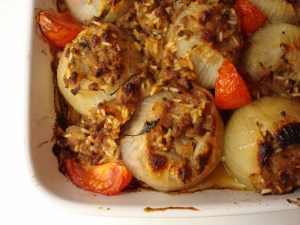 Serve with bread and some feta cheese if you like.

I claimed at the beginning of this post that I am making something I’ve never made before, but it’s not strictly true. I have never stuffed onions, and they were nice, although a bit annoying to peel when hot. But I’ve made the filling many times before. You can use it to stuff all kinds of vegetables like aubergines, courgettes, peppers or tomatoes. Just remove the flesh and use it in the filling (well, apart from the peppers!).

This dish is best served after it has cooled down to room temperature. If you can wait!

Previously on Round the World in 100 Recipes:
Spetsofai

Next time on Round the World in 100 Recipes: A treat from Crete!