About a year ago, when I first found out I was moving to Oxford, I did what any sensible person would do: research the restaurants and make a list of the ones I wanted to visit. The Guardian’s Oxford’s top 10 budget eats seemed a good place to start, but I was quite annoyed to find out that the Big Bang had since closed.

Forward a few months later and it’s back, at a different, posher location apparently. This was the first time I had been to the Castle Quarter, and I wasn’t sure how I felt about all these restaurants taking over the beautiful historic buildings, but half asleep after a night shift and with only an hour on the car parking meter, there wasn’t much time to worry about it.

I must have been a bit grumpy, as things started annoying me quite early on. I liked the newspaper-style menu, and the room was bright and spacious. Using a tablet to take an order though is silly, especially when it’s obviously taking much longer than good old-fashioned pen and paper would. Service was friendly, but they did that weird thing when they pull out a chair and sit next to you when ordering, which I’m not very keen on. It just felt like they were trying a bit too hard to be cool.

But none of that is too important if the food is good. I suppose it’s a bit silly to go for anything other than sausages, but Alex liked the sound of the bacon steak and poached eggs. It was pretty disappointing; the bacon was, and I quote, “fairly gash”. The eggs were overcooked – is there a worse food experience than cutting into an egg expecting gooey yolk to ooze out, and getting, well, nothing?

My baguette was much better, with two fat juicy sausages and served with fried onions and a tangy homemade ketchup. I gave half of it to Alex to make him happier.

I guess the moral of the story is pretty obvious: stick to what the restaurant claims to be doing best – sausages, in this case. But you’d expect anyone to be able to poach a couple of eggs and fry some bacon. Having said that, I might go back for dinner at some point and try the main menu – the selection of sausages is pretty extensive and sounds pretty interesting.

Don’t you just love it when something comes together with no planning, almost by chance? I was feeling hungry but lazy the other day and, somehow, it was one of those days that I didn’t fancy a big plate of pasta for dinner. It doesn’t happen very often, so I’ve got to embrace it when it does. In an effort to be healthy, I thought peas. And, you know, spices are good for your metabolism. And sausages…well, I can’t justify the sausages. But I don’t have to. They taste good.

Ingredients (serves 5 as a side)

First, place the sausages in a tray and cook in the oven – how long for will depend on the type of sausages used.

Fry the onions in some oil until soft. Add the garlic and the spices and fry for a couple more minutes, making sure the garlic doesn’t burn. Add the frozen peas, cook until defrosted and then mix in the tomato paste and some water and bring to the boil. Cook until the peas are soft.

Keep checking on the sausages – when they are ready, cut them into inch-thick pieces and add to the peas. Let everything simmer for 10 minutes, season with salt and serve with some naan bread.

This was unexpectedly good. I loved the contrast between the sweet peas and meaty sausages, and the Indian spices made this perfectly fragrant and slightly hot. Sausage might not be hugely traditional but I can see this becoming a favourite either by itself or as part of a curry feast.

I’m writing this now from the safety of my home and my head is not sunburnt anymore, my legs are not in a stupid amount of pain from skiing and my tastebuds have almost recovered from the salt overdose. The weather was beautiful, the snow was fine (although melting quickly) and the food was filling and intense. That much became clear after the first lunch:

By the way, don’t ask me what any of the dishes are called. My friends told me loads of times but my German skills are non-existent and I’ve completely forgotten. My normal approach was to check what people around me were eating and then point at it until someone told me the name. It worked, I think.

Anyway, the heart-attack in a bowl above consisted of some pasta/gnocchi, loads of cheese, crispy onions and tasted quite good despite (or maybe because of) the fact that it was swimming in fat. My heart was racing and it wasn’t because of the skiing-induced adrenaline.

Well, here’s to hoping all the bad food is cancelled out by the fresh air, the amazing views and the physical exercise. Who knew that going down a hill could be so tiring.

We stopped at a hut, and I saw someone eating this giant ball of goodness and I wanted one. I was warned by Phil that it is weird but I wanted to give it a go anyway. Well, it was weird. It’s like a giant steam sponge, which is great, and it’s surrounded by vanilla custard which is even better. But then, rather than throwing some chocolate on the top and in the middle, someone decided it would be a good idea to fill it with some fruity jam with Stroh and sprinkle it with enough ground poppy seeds to get you arrested in most countries. It promised so much but it ended up being plain odd.

And this must be the highlight of our culinary experience, although possibly not in a good way. Cheesy sausage. A sausage oozing with cheese at every touch of the knife. Make your own jokes.

I realised today that I had to add salt to my food twice to be able to taste it. Austria, you have destroyed me. There goes my career as a food critic. But it was a sacrifice worth making since this was a great week with beautiful weather, enough skiing and loads of food and drink. A refreshing Almdudler in the sun is a beautiful thing and it is in that and many other respects that the Austrian Alps are so much better that the French ones.

This is not your standard Greek dish. It is not eaten next to the beach, with a cold beer in your hand and the temperature hitting the 40s. Instead, think snow, skiing, log fire. Yeah, we have that in Greece too!

It comes from mount Pelion on the peninsula you see above, which I have never visited but I am desperate to. Its beautiful and unique location means that you can ski while having a view of the sea.

As you would expect from a winter warmer, Spetsofai is spicy, rich and full of flavour. The ingredients are very simple but it’s important to pick some nice sausages, preferably Italian ones as I am guessing they will be the closest to the Greek ones. I used some Lefkas ones, from the same producers that make the Lefkas salami which is now becoming quite famous in the rest of Greece.

Ingredients (for 4 cold and hungry people): 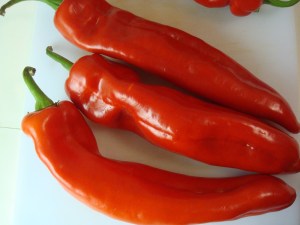 It really is very simple. Cut the peppers in quite large chunks and fry them in some olive oil until soft. 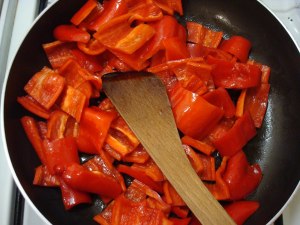 Then slice the sausages 1 inch thick and fry them.

Remove from the pan. In the same one, add the chopped chillies , give them a couple of minutes with some olive oil, and then add the tomatoes and the salt/pepper. Add some water and let it cook for 5-10 minutes. Add the sausages and peppers to the sauce and leave it for a further 5 mins or until it looks saucy but not too watery. 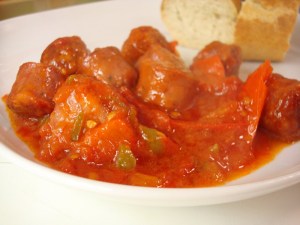 Serving possibilities are endless really, but I like to keep it simple with some nice crusty bread. Feta cheese (of course!) goes brilliantly with it. There is no reason though you can’t serve this with some pasta or mashed potatoes.

Next time on Round the World in 100 recipes: Summer might have just come early. And I am turning vegetarian. Weird stuff.